NCC Officials Push For Cottonseed Assistance In Next Farm Bill

NCC officials pushing for cottonseed, other assistance in next farm bill 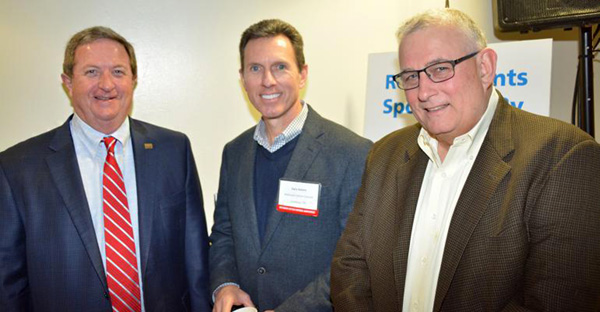 Ronnie Lee, left, chairman; Gary Adams, president and CEO; and Craig Brown, vice president for producer affairs, at the National Cotton Council were among those participating in the Mid-South Farm and Gin Show.

The cotton industry isn’t throwing in the towel, so to speak, on the designation of cottonseed as an “other” oilseed as part of its ongoing effort to get the fiber back into Title I of the 2017 or 2018 farm bill.

As most growers know, cotton was left out of the commodity title of 2014 farm bill in an effort to avoid further political controversy and trade retaliation because of the WTO case brought by Brazil against the U.S. cotton program. National Cotton Council officials want to change that.

“For more than a year now, NCC has been working with Congress and the previous administration to try to get cottonseed designated as a covered commodity and eligible for the ARC and PLC programs in the 2014 farm bill,” said Ronnie Lee, a producer from Bronwood, Ga., and chairman of the National Cotton Council.

“Support can be provided for cottonseed without running afoul of the agreement with Brazil that settled the WTO case and without violating U.S. commitments under the WTO. We strongly believe we need a cottonseed policy in place to help provide support to our producers as a bridge until the new farm bill is enacted, hopefully before expiration of the 2014 law.”

Lee’s comments were included in testimony submitted to the House Subcommittee on General Farm Commodities and Risk Management, which held one of a series of hearings on the next farm bill on Tuesday (April 4). The hearing was chaired by Rep. Rick Crawford, chairman of the subcommittee.

Back in Title 1 of law

While it is working short-term for passage of the cottonseed designation, Lee told the subcommittee the NCC is developing its policy objectives for cotton in the next farm bill, which could be passed in 2017 or 2018, depending on who you talk to in Congress.

“We know that a meaningful safety net for cotton must be included in Title I (Commodity Title) of the farm bill,” he said. “Better protection in times of depressed markets can take on several forms, and our industry will continue to pursue the best avenue to provide growers adequate protection that is consistent with both our international obligations and the needs of our industry.”

During the debate over the Agriculture Act of 2014, congressional leaders opted for the Stacked Income Protection Plan as a shallow-loss coverage protection program for cotton. STAX, as it became known, proved to be inadequate as a safety net when cotton futures dropped from 90 cents a pound to 50 cents a pound after the new law was passed.

“Market volatility and mounting economic pressures underscore the critical importance of an improved safety net for cotton farmers,” said Lee, noting cotton prices have improved since reaching a bottom in 2014 and 2015 but still do not cover the cost of production in many areas of the Cotton Belt.

The NCC’s testimony said farms and businesses directly involved in the production, distribution and processing of cotton employ more than 125,000 workers and produce direct business revenue of more than $21 billion. Accounting for the ripple effect through the broader U.S. economy, direct and indirect employment surpasses 280,000 workers with economic activity of nearly $100 billion.

Due to the decline in prices received and input costs that have changed little, USDA’s 2016 economic data shows 19 percent of cotton farms are considered either highly or extremely highly leveraged.

Regarding new farm law, Lee said the NCC is strongly opposed to attempts to reduce the budget available for the upcoming legislation. Likewise, the NCC also will work to prevent any further tightening of payment limits and eligibility requirements.

Lee said the NCC believes the current definition of “family member” that is used for actively engaged provisions in the farm bill should be broadened to ensure extended family members are not forced out of the family farm simply because they do not fit within an arbitrary definition for “family member.”

Among other farm law priorities listed by the NCC chairman was the need for adjustments to the extra-long staple loan program and competitiveness program and steps to improve crop insurance and conservation programs, which are integral parts of many producers’ operations and achieve the goal of improving and protecting the environment while also improving farming operations.

Regarding crop insurance, Lee said overall the federal program is working well but there are a few areas that can be improved. The NCC is working with the Risk Management Agency to improve quality loss provisions that have proved inadequate for many producers in the Southeast region who suffered through extensive rains during the 2015 and 2016 harvest seasons.

Another crop insurance component – important in the Southwest region and that was allowed in the 2014 farm law – is the ability to insure Enterprise Units by practice. The NCC believes the RMA has not implemented this provision in the manner intended by Congress and it should be reconsidered by USDA, and if necessary, further clarified in the next farm bill.
The NCC believes new farm law also should continue to fund the Economic Adjustment Assistance Program. First authorized in the 2008 farm law, the EAAP is helping to stabilize the U.S. textile manufacturing sector and help it remain competitive.

The NCC’s testimony noted that while the world’s consumers continue to express their preference for cotton products, the tremendous increase in low-priced polyester production has created extraordinary hurdles for increasing global cotton demand.

The NCC’s testimony also called for continuing cotton’s research and promotion program (check-off program) as this effort generates a positive return ($7 for every $1 contributed) for U.S. cotton producers and cotton product importers at no cost to taxpayers.

Members of the General Farm Commodities and Risk Management Subcommittee also heard from witnesses who shared the perspectives of the rice, peanut, canola, and sugar industries on the importance of both commodity policy and crop insurance.

“Under current conditions, the farm bill is being tested,” said Rep. Crawford, who represents northeast Arkansas. “With net farm income down for the fourth year in a row, it is critical we get farm policy right for farmers and ranchers. We must be mindful of the challenges all of our producers are facing when crafting the next farm bill.”

To watch a webcast of Tuesday’s hearing, click on https://www.youtube.com/watch?v=oFfrMzOs0G4